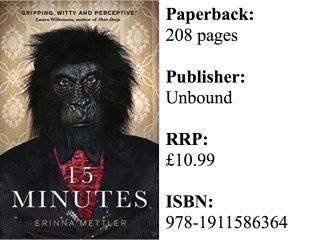 15 Minutes, a collection of short stories by Erinna Mettler

This is an accomplished collection of short stories, related to a cunningly chosen theme which is gaining in topicality, rather than losing it.

The title refers, of course, to Andy Warhol’s statement, ‘In the future, everyone will be famous for fifteen minutes’, and at the heart of the collection is the story from which the book takes its name, a poignant account of how an impoverished young man with a cowboy hat makes enough money by modelling naked for the artist to be able to rescue his girlfriend from a life of sleaze. The book is an exploration then, of the many ways in which the phenomenon of celebrity touches the lives of ordinary people. The consequences may be positive or negative; incidental, accidental or the result of the craving to achieve fame. Those touched range from the middle-class couple who have lost their Harry Potter-fixated child to cancer, to the homeless person who tunes into the zeitgeist on the day that John Lennon is assassinated and turns the situation to his advantage. Celebrity, like a stone dropped in a pond, sends out ripples that may engulf us, change the course of our lives or, simply, give us pause for thought.

In each story an incident, an object or a reference associated with a celebrity is interpolated into the experience of someone on the periphery of fame, and from this deft interweaving, something dynamic or thought-provoking emerges.

Mettler’s canvas is a broad one. Her famous people are drawn from all walks of life: artists, politicians, musicians, actors and so on. And she tackles a wide range of issues: the aftermath of Margaret Thatcher’s policies on a former mining community; the struggle of a young woman, inspired by Oscar Pistorius, to come to terms with her own disability; the reality of our diverse our society as opposed to the fiction that most of us willingly subscribe to whenever there’s a royal wedding. In one story, she juxtaposes the experience of a thwarted young writer whose mother works as a cleaner with that of the mother’s employer, a wealthy but talentless man who has surrounded himself with memorabilia belonging to famous authors. This is a particularly telling meditation on the impact of poverty on life chances.

Mettler’s characters are robust and recognisable, whether they’re young or old; male or female; angry, lost or vulnerable.  We can empathise with the former boxer whose memory is being subverted by dementia, as well as the young man who resists bullying in order to express his own sexual identity. Most women will immediately recognise the archetypal sexual predator, the lecturer/Art expert with a long history of molesting young women behind him. But perhaps the pièce de resistance is the depiction of the art critic who is undoubtedly based on Brian Sewell. This is a deliciously wicked portrait – ‘picture-perfect’ you might say.

In fact, Mettler draws upon an extensive personal ‘hinterland’ to create the contexts for her stories, which is not something you can say about a lot of short story writers. She’s as comfortable writing about a northern mill town, as she is about a faded American diner or the London art world. One of her stories, ‘What Me and Pa Saw in the Meadow,’ is set in a Mexico-based dystopia which is described so vividly that I could probably paint the lurid landcape from memory.

Mettler is a fluent and assured writer. She’s not at the Eimear McBride end of the literary continuum. She’s not pointlessly flashy, or out to shock you just for the hell of it. That’s not to say that she can’t break with literary convention or do stream-of-consciousness. Her story about the young woman eaten up and spewed out by a reality TV show (Max Clifford figure referenced in the background) is an object lesson in this. It’s just to say that she doesn’t do it most of the time.

She’s clever and she expects you to be clever too. She’s an observant writer and she expects you to be an observant reader. Of course, as you read each story, the protagonist achieves approximately fifteen minutes of fame by featuring on the cinema screen of your imagination. So, the title of the collection is even cleverer than you first suspected. Short stories often deserve a second reading which, in our busy world, they usually don’t get. I would advise you to take your time with Mettler’s impressive ‘Fifteen Minutes’, to appreciate the ingenuity of her tales, and to ponder what lessons they might have for us.

Ironically, the author had to crowd-fund in order to bring this volume to publication, an awful drain on a writer’s time, energy and creativity. Perhaps if mainstream publishers had taken more than fifteen seconds to look at Mettler’s manuscript, they would have realised what gold is buried here.

Janet H Swinney is a writer of short fiction and drama. Eleven of her short stories have appeared in print anthologies. ‘The Map of Bihar’ (Earlyworks Press, UK and Hopewell Publications, USA) was nominated for the Eric Hoffer prize for prose 2013. ‘The Work of Lesser-Known Artists’ was a runner-up in the London Short Story Competition 2014 and appeared in ‘Flamingo Land’ (Flight Press, 2015). Several other stories have appeared in online literary journals based in India and the USA. ‘A Tadge to Your Left’ was shortlisted in the Ilkley Literature Festival 2017 and will shortly appear on the website of the Word Factory. She has had listings in competitions ranging from Fish to Fabula. Her first collection of short stories is in production.