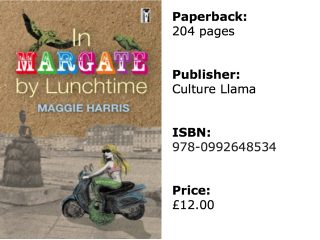 The Short Story Review: ‘In Margate by Lunchtime’ by Maggie Harris

In Margate by Lunchtime is Maggie Harris’ second collection of short stories, which are born of her intimacy with the Kent coastal resorts of Margate, Ramsgate and Broadstairs.  Her first collection, Canterbury Tales on a Cockcrow Morning, was also published by the independent publisher Cultured Llama, who offer a growing range of short stories, poetry and non-fiction.

Harris’ exploration of this corner of England is vibrant and lyrical, drawing on a wide span of history, personalities and geography to chart the changing fortunes of the area. This playful collection sometimes veers into magical realism, leaving a collection that is occasionally fantastical and frequently fantastic.

This is clearly a part of the country that Harris has a lot of love and knowledge of, and despite the relatively small geographical locale, finds it to be an area stuffed full of stories. One of the stories is about a guided tour of the area, and a character notes

the continuing developments on the site that had once held amusements, including a helter skelter and a waltzer. She drove up the hill, pointing out where the disco Nero’s used to be, and the open air swimming pool. Now that, she told him, had been a sight to behold.

…She left him with an image of Ramsgate packed with visitors from pleasure ships, stage coaches and horses, Victorian travellers pouring out amid the steam trains, breathing in the sea air they thought good for their health.

In exploring her chosen locale, Harris has arranged the 21 stories in this book in strict chronological order, bookended by a pair of stories about writing and inspiration. The collection moves forward from the introduction of Christianity through to a story told from the point of view of buried bones under Manston airport. Sadly, the stories with an older setting don’t work as well as those set onwards from the 1970s, meaning that the book doesn’t really get going until a third of the way through.

The issue with these stories with an older setting is that their brevity (they tend to come in at around 5 – 10 pages) doesn’t give the reader enough time to feel their way into the period before they’ve reached the conclusion. There isn’t enough context, or space, for the characterisation and narrative to get going once the reader has become orientated with where we are up to in Kent’s history. This is a shame, as Harris has picked some interesting moments to write about, but also the title story, which is given proper time to breathe, shows that Harris can write a decent historical short story when working with a longer page count.

The book really gets going when it hits ‘The Year The Flamingos Came’, a superb story set in a rubber factory during the late seventies or early eighties. The lad character, Kerry, is well drawn, and it feels for the first time like Harris has something to say – about immigration, about women’s role in the workplace, and about industrial decline. With this story the book changes gear and the settings and predicaments are more recognisable and relatable, meaning that the length works with and deepens the stories, instead of the form working against the content.

‘The Year The Flamingos Came’ is one of a number of stories telling very personal stories about the struggles of everyday life. Harris has a keen eye for people’s struggles, especially those of women, and manages to create a series of memorable characters. We get to hear from Alice, escaping parenting and night work for a rare night out, Greek restaurant proprietor Thanatos straining to meet the demands of his wife and daughters, and Clyde who was fostered by a white woman and is struggling to cope with his acceptance of his black heritage and his new responsibilities as a parent. Most tantalising is Dilys, recapturing a summer romance that her lover captured in a hit single that launched a long career as a singer. Harris is good at finding ordinary, working class characters and locating them at the heart of interesting narratives and observations.

The lives of Harris’ characters in part mirror the decline of the area they live in. This is sometimes implicit, through references to rubber factories or shift work packing toy trains, reminding the reader about a whole swathe of industry and work that has been hollowed out in the past thirty years. There are also references to long-gone attractions, the decline of area as a holiday resort and the loss of fishing boats.

But it’s also explicitly in the minds of characters: in ‘The Year The Flamingos Came’ two characters are discussing the future of the rubber factory:

“Chrissake, another six months and they’ll be threatening redundancies again. Did you see the news last night about the pits? Blighters weren’t happy with closin’ down Chislet; first excuse was no more steam trains, now they’re going on about steel. Happen there won’t be no call for it one day.”

“That’ll never happen. That can’t happen. You can’t take away work like that from men.”

This echoes a sentiment expressed in reaction to news about the advent of steam ships in an earlier story: ‘“Tomfoolery! And steal the living from honest men?”’ However, it would be wrong to say that this is a book that is solely about the decline of a once-vibrant corner of the country. Firstly, the chronological setting means that as we approach the end the area regains a vibrant and interesting sense of place. These possibilities are more cultural than anything else, as shown in When Benjamin Zephaniah Came to Broadstairs and the reference to the new Turner Gallery in Margate which ‘glinted like a schooner about to glide off into the sea.’ It is perhaps telling that the final story about the area is about its potential to further open itself up further to international or national travel via Manston Airport.

The book’s spirits are further lifted by Harris’ gift for magical realism. Characters step in and out of time, and The Mermaid Tour features a mermaid tour guide (‘He’d had a long journey and couldn’t be bothered to work out the machinations of a mermaid on a scooter.’) Particularly impressive is Alice, when a combination of Martini and hash results in the title character to imagine people in a nightclub as a series of animals:

Her feet became a faun’s, small hoofed and dainty as they negotiated the mosaic floor, her elbows morphing from bone to feather, giving her flight up the spiralled stairs and out into the foyer…

And underpinning all this is a beautifully lyrical writing style – a flock of flamingos are described as resembling ‘two dozen neon ballerinas’, and a sunrise is like ‘a carnival spider appearing above a wall. Its ascension set the horizon running into a blood-red, kerosene sky.’ A character at an arts festival aroused by the male participants and attendees muses that

‘[y]ear after year the Gods returned, bringing their Bacchanalian bodies of promise, their utterances of poetry written in crofts, on wild mountainsides, their hardened fingers moulded to guitars and violins.

Overall there is a real sense of ambition to the desire to create a cohesive arc, which Harris more or less manages to meet. This is definitely a book worth checking out, for the sheer beauty of the writing and the engaging and lively sense of narrative around Harris’s favourite corner of the country.

Read an interview with the author, Maggie Harris, here.

James Holden has had his short stories published by Silver Apples Magazine and On The Premises, and performed by Liars League. He lives in a retirement village in north London with his wife and two children, despite only being in his thirties