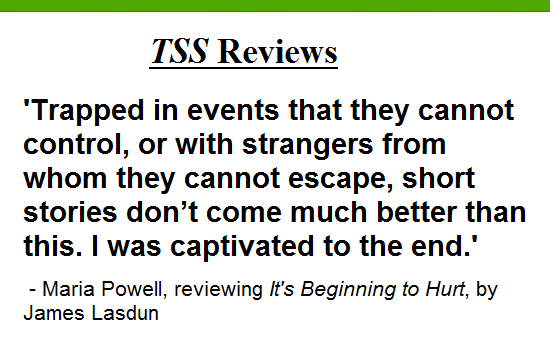 How do strangers make you feel? Uncomfortable, unsure of yourself, or do you have a happy memory of someone you met but whom you are unlikely to see again? It’s Beginning to Hurt studies the impact strangers have on us through a collection of dramatic tales that take you to some uncomfortable places. The characters drop unwittingly into the laps of unscrupulous people, grapple with their weaknesses, fail to alter their destiny, or else they fatally misjudge situations with some catastrophic consequences. Trapped in events that they cannot control, or with strangers from whom they cannot escape, short stories don’t come much better than this. I was captivated to the end.

The title story is brief, only two pages long, and is a brilliant piece of writing, delivering a tantalising revelation of lost love and a life that was never to be. It is sharp, it is short, and yet, it is complex.

Another very short story, ‘Annals of the Honorary Secretary,’ was my least favourite because I had no empathy with any of the characters and the story just seemed to fizzle out. But, out of sixteen stories this is the only one that left me unmoved.

Conversely, ‘Cleanness’, one of my favourite short stories, takes us to the thrill of the start of a relationship. The reader is left to make up their own mind about the ending, and I love that, because it lends itself to the reader having a deeper involvement. Roland is lost, and is wearing a top hat and tails on a pig farm. Such an unlikely scenario, and yet it works beautifully. Roland is late for his father’s wedding, having taken a wrong turning he finds himself surrounded by mud and pig slop, and then he sees, ‘a man stood in the doorway, holding a live white rabbit by the ears. Both the man and rabbit were staring at him with expressions of amazement.’ The tension is racked up; it is a skilful and compelling short story.

There is a light touch to Lasdun’s writing, so much so that it appears effortless. However, only real masters break the rules of writing and get away with it; not just get away with it, but by breaking them they are liberated and able to pitch the story at another level. One of the elementary rules is that the protagonist must undergo a change, and yet many of Lasdun’s characters are left exactly where they started. This works for me, it mirrors real life, because we are not always transformed by our experiences. Many things can affect the lack of change in a person: the pull of money, it may be too late, or the temptation of sex is too strong to resist. Tried and tested themes used by writers of many guises, but Lasdun writes wider than this, and surprises us with a twist of a kind gesture back firing leaving that person stranded right back where he started. It works because we all know that life is unfair, and it works because life does not always reward the good soul.

‘An Anxious Man’ is a great story which won the BBC National Short Story Award in 2006. The main character comes full circle after having bargained with the universe that he would change in many ways; he would devote himself to the poor and needy, give up drinking, and sacrifice a valuable clock if only his daughter is found safe and sound. He is re-bonded to his former way of life as quickly as he made these promises, and we are left knowing that the consequence of deluding himself will be far reaching. Long after I had finished this story I was left with an awkward feeling, because at the end of the day haven’t we all, at some stage in our lives deluded ourselves?

Lasdun’s short stories have the knack of leading us somewhere unexpected, where we are knocked sideways, only to end up feeling decidedly unsettled. How would any of us feel if a complete stranger ruined our life in a new place where we were just settling in nicely? In a story called, of all things, ‘Totty,’ June who has been kind to her neighbour is suddenly snubbed by her, and then her cleaner unexpectedly gives notice. Things are slowly falling apart, ‘The clear invigorating air of her new life here in the country had been polluted, it seemed to her; a foulness spread into it.’ Her life unravels further in an unexpected way, but much remains unsaid so that we are left to ponder what will come next.

Then there is jealousy, all those feelings of insecurity and anxiety, described so very well in, ‘Peter Kahn’s Third Wife,’ – ‘jealousy had surfaced soon after their marriage, and now lived with them like a third person whose volatile behaviour had to be carefully negotiated.’ In ‘Caterpillars,’ nature is out of control, the balance off kilter. Cocoons, usually thought of as innocuous, are instead described like this: ‘They look like invalids, don’t they, the trees? Covered in bandages.’ Nature can be cruel and perverse, and through global warming, yet another thing for us to grapple with and to fear. This sharp observation of all that surrounds us as a potential threat, the lucid insights into human nature and its passions, and the reality present in the stories all make up for a memorable and worthwhile read.

Maria Powell took an Open University course in creative writing where her love of poetry and short stories was rekindled. Over the years she has been placed in Flash 500, Fish Publishing and the Bath Short Story Award. In 2013 her story entitled, ‘The Pig’ was published in a short story collection by Hearst Magazines UK. When she’s not writing she teaches Italian to 25 mature students, she enjoys cycling to the local Pub, kayaking across Poole Harbour, and eating out with friends in some of Dorset’s finest restaurants.