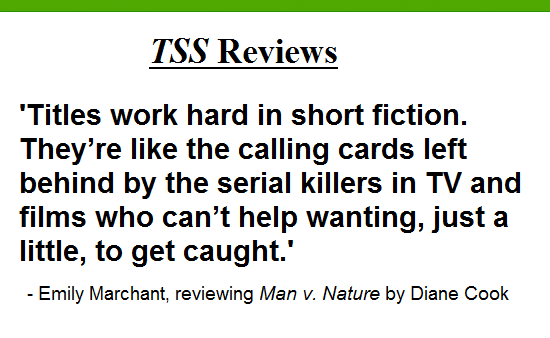 Titles work hard in short fiction. They’re like the calling cards left behind by the serial killers in TV and films who can’t help wanting, just a little, to get caught. While Diane Cook is (almost certainly) not a serial killer, the title of her 2014 debut collection, Man V. Nature, is a good place to start unravelling the strange and enduring thrill of reading Cook’s fiction, which, by the way, like so many reviewers of the collection so far, I’d definitely recommend.

As Robin Romm commented in her New York Times review of the collection, Cook certainly pits man against nature literally in many cases. There is a flood with streets full of floating corpses, little boys resorting to cannibalism in a wintry forest, middle-aged men starving to death in a drifting dinghy.

But Cook takes these situations, many of which are common post-apocalyptic tropes, and hangs them as backdrops for the real action of her stories. We aren’t told why busloads of ten-year-olds are incinerated, other than the playfully empty explanation that they are ‘not-needed’. In ‘A Wanted Man’, we don’t ever find out why or how the central character is granted sexual superpowers. There are many questions about the stories’ worlds that go unanswered in the collection. But the genius of Cook’s writing is that these questions become largely irrelevant.

That’s because we’ve got more fascinating things to focus on. The struggle at centre-stage in the stories – the thing that really grips the reader – is the struggle between ‘man’ as self-conscious character, and ‘man’ as animal, or as natural entity.

Hence the confusion in the collection’s eponymous story. Dave, a television writer, insists on calling his imagined TV show ‘Man V Nature’, even though it is about a war between men. Fellow cast-away Phil points out that the show could be more accurately called ‘Man V Man,’ but Dave’s not having any of it. And I’d be inclined to agree with him. I think he’s making the point of the collection as a whole: that even when men struggle against one another, they’re fighting something more powerful and a hell of a lot more indefinable than just another person. They’re fighting the ancient natural currents inside themselves, that push them at times of stress to behave in ways they can’t always understand.

Take, too, teacher-cum-ageing-seductress Janet, the protagonist of ‘Meteorologist Dave Santana’. Janet’s simplest success – “she did what she loved and did it well” – comes in the form of multiple teaching awards. Her female students adore her for teaching them “how to really have it all”, a lesson that is distilled into one dictum throughout the story: don’t get pregnant. But as Janet’s powers of seduction begin to fail her, her central belief as woman and teacher is exposed as a trap. She cannot move forward like her “settled” brother, and even the school where she works is violated by the pregnant wife of Dave Santana, the man who’d given her the highest hopes of something more than sex. She is left poking through the ruins of her lifelong convictions like so much rubble – “Was that what she really wanted?” – and just finds herself lonely, bitter, longing for the child that grew in another woman’s womb.

The story in which we find Janet is remarkable for being the most naturalistic on offer. It nestles at the centre of the collection and seems to provide an oasis of normalcy in relation to the oddities arranged around it. Janet’s struggles are a focal point with no competition – the story doesn’t have the same geopolitical, environmental, situational obscurities that we see in the other stories. Despite this ostensible difference, though, the overwhelming effect is one of similarity, of creed, with the rest of the collection. Janet’s inner battle – between her self-consciousness and her natural urges – are totally akin to those of the other protagonists Cook lines before us. Despite living in a world we recognize well, Janet is so humanly odd that it feels as though she quite naturally belongs alongside the other bewildered actors, cast though they are in flooded cities, child-incineration chutes and kidnapper-terrorized neighbourhoods.

It’s easy to see why Cook was winner of the 2012 Calvino Prize for Fabulist Fiction. She squeezes every ounce of value out of her boldly imagined fantasies to set it as a counterpoint to the thing we are all actually much more interested in: the oddity and the inexplicability of ourselves.