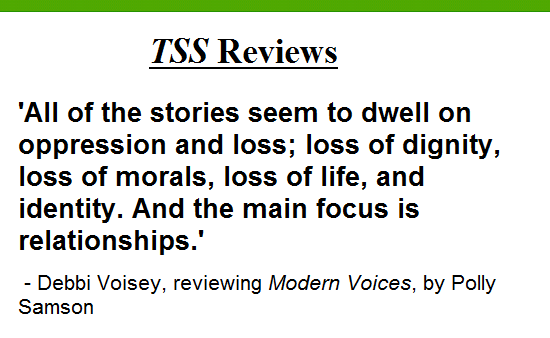 Novelist, playwright, lyricist – there are many strings to Polly Samson’s bow. As one half of a dynamic song writing team along with her husband Dave Gilmour, she has written songs for his band Pink Floyd as well as for his last solo album. So she is no stranger to the poetry and beauty of words, and this shows in “Modern Voices Collection” which was published for Good Housekeeping magazine. There are just 5 stories, so this is a great way to sample her talent. All of the stories seem to dwell on oppression and loss; loss of dignity, loss of morals, loss of life, and identity. And the main focus is relationships; old ones, new ones, relationships with lovers, children, family – and most of all with oneself. The coast and the sea feature heavily in the short stories, and Samson indeed spent much of her life in the West Country. Its rugged beauty is an obvious mood-placer for her writing.

The first short story in this collection – A Rose for Paul – takes us to a funeral, where the narrator’s ex-husband is being buried by his second wife. In the midst of this death, she muses on another from her past, and when she looks at the son of the deceased, standing solid as oak, an arm around his mother, she is reminded of a child she wanted and her husband didn’t:

“I’ll get the windows done while you’re at the hospital. It’ll take my mind off it.” (Vincent said). Well, I was home from doing his bidding and he hadn’t even stayed home… From this, you see that he is a cold and detached man and that she is a very compliant wife. … All Vincent said when I heaved myself back through the door was: “There’s blood on your skirt.”

Using cleverly crafted imagery of a life leaving her body, Samson shows us a mother’s pain, and also her instinct to protect and nurture even when all hope has gone.

… I woke with that trickling sensation, thinking maybe I was dreaming until I looked down and saw a pulse, as he burrowed his raw little body, this tiny marsupial, smaller than a thumb, snuggling himself right into the folds of me, and instinct took over as I closed myself around him.

In her grief, and in her mind, her lost baby’s soul becomes a tangible thing and her mothering instincts take over. I found these moments of altered reality disturbing, sensing that the narrator was on the edge of a breakdown. She keeps her son with her, but only when she is alone, his ghost keeping her company. The old flat in which she lived with her husband lies unused and untouched; when she visits she hangs her keys “on the hook beside Vincent’s still there like an old ornament.”

Right up until the end, the narrator is in denial (though her marriage was one sided it was what brought her son into her life, however briefly), and we are left knowing that the comfort of her delusion will always stay with her, because she does not want to let it go.

Next on offer is a tale of excess and ignorance, ‘The Morning After’. Recently widowed Olivia finds herself at a charity auction, amongst the plump men in their dickie-bows, the women glinting with sequins and spite. Samson paints an ugly picture of a fake and sinister world:

The usual things were up for grabs: the golf weekends and wing-walking opportunities that would be re-donated to another charity as soon as the winning bidder sobered up, the dinners at expensive restaurants hungry for promotion, the handbags donated by designers fashionably doing their bit for the environment.

We are left wondering if anyone is genuine; if anyone really cares.

Along with her friend, Sabrina, Olivia is interested only in the people around her who she deems worthy:

The man who had been so enthusiastically refilling her wine glass claimed to have once been a drummer in a rock band. She and Sabrina found him just a little bit interesting after that.

Finding herself attracted to the handsome man on the stage who is speaking passionately about the plight of the Indian tiger, Olivia ends up going home with him. He finds her beautiful, attentive, seemingly of the same mind as him on the matters about which he cares. But Samson hits us with a blow of reality at the end, and Olivia is seen for what she really is:

If he tugged hard enough the blonde tresses would probably come off in his hands and there is something unnatural about the curve of her cheek, in the tightness of her jaw and the way her brow remains mysteriously untroubled…

By showing us the falsities that this character displays in her appearance, Samson also reveals the flaws and the lies in her morals and personality.

‘The Itch’ is my favourite short story in the collection. A lot of pain simmers beneath the surface; the memory of a trauma that threatens a current relationship; the shutting down of the narrator wife. “The Itch” is symbolic – the seven year itch that can crush a relationship – and it is used in this story to show how much the couple here have changed. As the human body re-generates all its cells over a seven year period, so these two have changed beyond recognition. By the end, in spite of all their experiences that once meant something, they have drifted far apart, kept that way by the terrible secret that was never shared. Recalling a time when they liberated some hapless crustaceans years ago, and a month before their seventh anniversary, the wife declares:

“Someone once told me that there’s a scientific explanation for the seven year itch. Apparently it takes that long for each and every cell in the body to die and regenerate. Strange to think there’s nothing of us left that set those crabs free on the night you asked me to marry you.”

Other subjects explored in this short story collection include: a child’s eye view of his parents’ relationship. Long since estranged, he harbours hopes that they can reconcile; and a heart-wrenching tale of how one’s love of one’s child is the blindest, the most pure and profound:

It was only later, as he slept moulded to my belly, that I realised that I hadn’t counted his fingers and toes, or looked for faults, or wasted time wondering if his father liked him: love is like that.

Overall, I really enjoyed this collection, although at times – especially in the first short story, ‘A Rose for Paul’ – I found the narrative quite jumbled, confusing and sometimes hard to follow. I will, however, be adding more of Polly Samson’s short stories to my “to read” list.