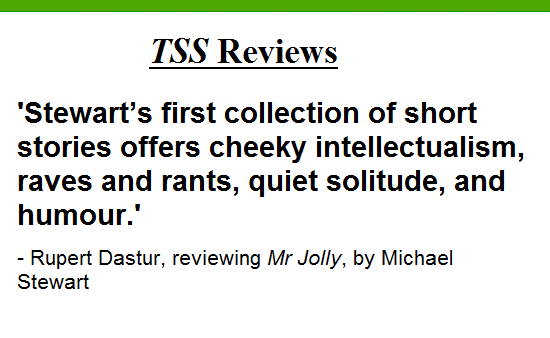 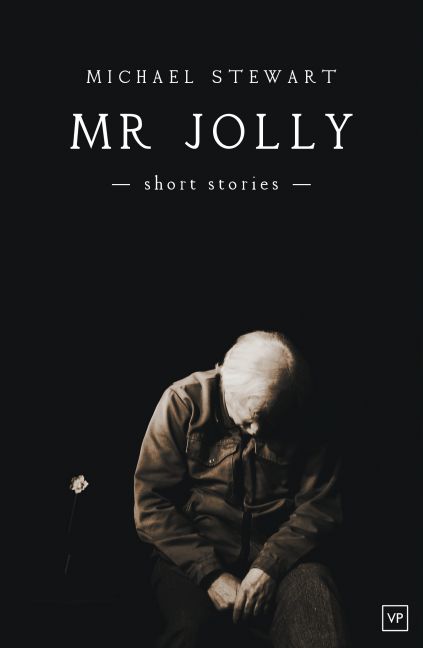 The cover of Michael Stewart’s short story collection Mr Jolly (superb work from Jamie McGarry) provides an accurate depiction of the content: the middle-aged man, slouched in his chair, looking a little fed up. Perhaps he is sleeping. To his right is a flower, floating against the black backdrop. This is a collection about ordinary people, like the man on the jacket, dealing with the difficulties and absurdities of life. The disjunction between the name Jolly and this man’s appearance also hints at the playful, diverse range of these short stories, while the flower adds a dose of the unexpected.

Stewart’s first collection of short stories offers cheeky intellectualism, raves and rants, quiet solitude, and humour. Like many short story collections at the moment, you would be hard-pushed to find an underlying theme, though this is no bad thing. In fact, it would be reductive to seek a linking subject in a collection whose major accomplishments involve the extraordinary spread of topics, styles, and characters.

These sixteen stories, all around the ten page mark, are accomplished. One of my favourite short stories in this collection ‘You Are Going Back’ is told in the second person – a technique which Stewart employs with intriguingly high frequency and to great effect. This story is pitch perfect, with a lovely quiet tone sustained throughout the narrative as the protagonist goes back ‘to the place where you played as a childhood.’ It is a reflective, pensive piece that retains an emotional intensity as memories surface like the old fish in the pond – the central image of the story. The story displays Stewart’s ability for the distinctive turn of phrase; pondering marriage, the narrator notes ‘you still love your wife, but there are too many differences. The differences that brought you both together.’

Another favourite, ‘Already Morning’ employs similar pathos and is also told in the second person. Centred on a romance that’s run dry, it shines an illuminating light on the dead-end feeling of limited possibilities in a difficult world and an almost existential, alcohol-dominated life with little direction. Added to this recipe are some amusing minor characters and a wry, tragi-comic prose that offers gems such as post-hangover epiphanies: ‘she has idealised you and you have idealised her, and it is a bit of a shock: the sober dawn.’

Between the triumphs, a couple of stories felt too idea-led, with the concept or joke trumping the prose. ‘The League’ and ‘The Naked Man’ fall into this category, though again the situations are good enough to carry the story through. Equally, the substance of ‘The Phone Call’ seemed a little lacking, although it’s screenplay style nicely pushed the boundary’s form.

Two short stories bordered the predictable, but remained extremely enjoyable. ‘Mann’ at the centre of the collection, zooms in on the furious thoughts of a perturbed guy running late for work. He’s angry, he’s driving, he’s potentially going to miss his meeting; he tries to overtake another vehicle – guess what happens. That said, this story showcases a monologue-style rant which can only be described as glorious. If someone is going to complain, this is how it should be done. Here’s an illustrative passage that’s well worth quoting in full:

They did not need a new sofa, they didn’t need a fucking new sofa, there was nothing wrong with it. What was this need she had for replacing perfectly good stuff with new stuff? Just because it wasn’t the latest style, just because she’s seen a different one on the telly. All this keeping up all the time, all his competition. He was boring, you have to change things, you just have to. No you don’t, you don’t have to fuck about with something if it does a perfectly good job. What’s boring about a bit of sense, about making sense for a change instead of rattling off all this fucking commercial shit? Shit materials, shit products, shit.

The story continues in this fast, full-bodied way and by the end of it, you’re standing up, your fists are clenched, and damn it you are ready for the righteous crusade. It’s a great piece of writing. The other short story which suffers a tinge of predictability is ‘Above and Beneath’. In this story, the narrator tells an extremely bizarre account involving invading monkeys. It’s not long before the location – a mental hospital set in rural England – provides enough of a clue for the penny to drop. Despite this, like ‘Mann’, the redeeming factors are more than sufficient to make the story a solid inclusion within the collection.

Spreading the variety of this book are a few examples that are wonderfully odd. A personal favourite is ‘The Blue & The Dim & The Dark Cloths’ about a troubled young man who goes through his habitual ritual, a task so odd that left me writing the singular conclusion in the margin: ‘weird as fuck’.

Isolation, estrangement, and miscommunication are some of the more dominant themes within this eclectic book and other truly excellent pieces concerned with these are ‘Making Contact’ which has one of the loveliest endings between the cover:

‘The Man in the White Coat’ similarly explores sanity within a family context, while the title story ‘Mr Jolly’ deals with these issues through beautifully poised prose and a powerful interiority. This latter short story is an exemplary examination of loneliness, reinforcing the difficulties faced by people living by themselves. In some ways, it can be argued that Stewart follows in the tradition of the best short story writers who have, over time, lent their voice to those on the fringes of society. What is special about this collection, however, is that in the same breath the author stresses that these edges are in fact at the very centre of family life and communities.

Fundamentally, Michael Stewart succeeds in fulfilling what is probably the most important function of fiction writing: penning prose that is fun to read. Even with the occasional wobble, these stories are eminently enjoyable. That he also adds depth and ingenuity simply raises the level of his accomplishment. Stewart has brought a superb collection to our attention and here’s to hoping we are given more of the same in years to come.

Rupert Dastur is a writer and editor. He studied English at Emmanuel College, Cambridge, where he specialised in Modernism and the Short Story, leading to the creation of TSS with the aim of furthering discussion, interest, and development of the form. He has supported several short story projects and anthologies, is the Head of Development at Khona Productions. His is work forthcoming in The Flash Fiction Review, A3 Review and Bath Flash Fiction Anthology 2016.