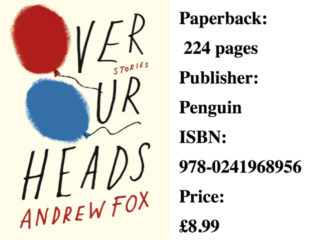 Over Our Heads, review by James Holden

The Short Story Review: ‘Over Our Heads’ by Andrew Fox

Over Our Heads is the debut collection by Andrew Fox, which was long-listed for this years’ Edge Hill Prize. Fox was born in Dublin and now lives in New York, and following the maxim that you should write about what you know has exploited his residential history to its full effect. The stories here are either set in Ireland or America, with those in America often centred around Irish expats, whilst two of the stories set in Ireland are about people returning for a break from their new home on the other side of the Atlantic.

That said, these are not stories that are obsessed with exploring the finer points of identity or the Irish diaspora as a community. With one exception, Irish identity is always an incidental detail in stories that are instead more about exploring of the stresses that big life changing events can bring about in what is a solid but not quite outstanding book.

Throughout Over Our Heads there is a big emphasis throughout on major life events: births, stags and marriages, university graduations all feature, some more than once. One especially touching story, perhaps the best in this collection, is about the embarrassing minefield that is losing your virginity amidst a sea of peer pressure, with the main character told by a friend that ‘You have to. You have to. You’re a man. But you’re not. And you need to be’.

Fox is an astute observer, rather than commentator on, of all of these rituals. It’s also worth pointing out that they are all explored from the point of view of male protagonists. But as with the Irish identity, he is not necessarily interested in producing an exploration of modern day masculinity, despite what story titles such as Manhood and A Man Should Be Able To Do Things hints at.

There are many twists and turns woven into these stories, but it would be wrong to say that they end with a twist. Characters instead have their lives altered – for better or worse – by these turns of events. The best thing about Fox’s writing is his skill in closing a story – the majority of the pieces here have beautiful last sentences, resolving the situation at hand, bittersweet  observations that open the way for the characters to continue with their lives when the reader has finished looking at them.

The sense throughout the book is that these stories are exerts of full lives and fully realised characters, and Fox is skilled at quickly sketching out personal histories and current situations. This is best shown throughout the story Graduation about a university graduation celebrated by a proud father and his ex-wife. Their relationship is perfectly shown through the tight, controlled dialogue that this story contains:

It’s not bad, actually’ Anne’s jaw muscles were working. ‘And you let him sleep on the couch then?’

She snorted. ‘I wouldn’t expect it to be. But the couch? On the night of his graduation?’

Incorporating current technology can sometimes be tricky for modern writers, as modern-day ease of communication can reduce the scope for drama and tension. However, the stories are lent a determinedly modern feel by the reference to Facebook and Skype that are scattered throughout and Fox is able to incorporate it properly into his plots. The Parcel is about a couple who ‘skyped each other every night, she jetted back to me on weekends and I pretended that I was the type of person who could live with that.’ In another story a character estranged from one his best friends but ‘I knew from Facebook friends of Facebook friends that he and Ciara were still together… I’d stalked my way to Ciara’s photos and scrolled through them’.  In Fox’s hands technology enhances rather than diminishes the stories here.

The book is peppered with occasional beautifully-written observations and pieces of description, most of which seem to centre around food. This is a world of grey casseroles, chicken wings with skin ‘a high-vis shade of orange’, wine that ‘coats your tongue and makes you spit blue for hours.’ The best passage here is probably in Manhood, with a brilliantly realised description of a dancefloor:

I’m scissoring the air in front of me like a maniac – stacking shelves, making boxes, mop that floor, big fish little fish – because I haven’t the foggiest notion of what else to do. Sweating like a bastard. Breathing like a train. Chemicals fizzing and popping in my veins…

Fox has ploughed a definite furrow within this book that would perhaps have benefitted from him more frequently branching a little wider beyond the constraints of Irish émigrés in New York. But he has plenty to say about major life events and their impact on all caught up in them that makes this a solidly interesting and enjoyable read.