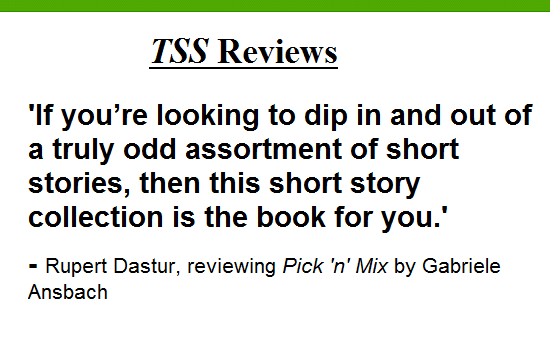 Pick ‘n’ Mix by Gabriele Ansbach is aptly named. Each story is a surprise – colourful, often sweetly ending, sometimes tasteless, occasionally sickly. Whether or not you like this collection really depends on how much variety you can stomach.

These fourteen stories lurch from one place to another, shift forwards and backwards in time, and skip from voice to voice. Ansbach has a kaleidoscope imagination – easily demonstrated by a brief scan of the character list which reveals members of the aristocracy, ageing lesbians, space travellers, shape-shifting aliens, gay clowns, idiotic thieves, and talking cats.

These short stories are often surreal and frequently silly: a secretary marries an earl; old ladies fall in love; a dissatisfied wife goes gallivanting around the world; a drunk entertainer leaves the circus, felines are given medical treatment, two thieves display derisory ineptitude, a teenage girl is kidnapped by aliens, and a woman recounts her childhood during World War Two. A few of the short stories are beyond single-sentence summary.

Several of the tales are so absurdly, but enjoyably bizarre that it’s impossible not to find oneself dragged along the page. The best example of this is ‘Milly Banks’s Date’. The title sounds innocuous enough, but soon after Milly Banks meets Sandy Simonds the standard narrative is derailed and we’re introduced to numerous extraneous members of the cast: a drunk named James Terriwinter who falls into a river and sails down the rapids on his umbrella; the bumbling women of Littlegramton Ladies Guild [sic], and Old Norrie who walks the beach trying to catch a seagull he wishes to barbecue.

In the course of events, there is a collision of vehicles and everyone (somehow) ends up in the water (presumably the river), down which tipsy Terriwinter comes floating, ready with umbrella and good intent. The madness quickly escalates: ‘A large policeman came along with a huge wooden spoon and bowl’ to rescue Milly and Sandy, while a lifeboat appears and scoops ‘the bus out of the briny with the help of a large sieve.’

And what of Old Norrie and the seagulls? Well, the members of this farce are swiftly deposited on the beach using ‘a large pair of pincers’ and are marshalled into helping the beach-roamer, though they don’t have much luck bird-hunting. Fortunately for all involved, some of the other ladies of the guild arrive with shopping from Waitrose and Sainsbury’s.

Amid this palaver, I can’t fail to mention the naked Highland dancing orchestrated by Mr McPherson, though it’s difficult to see quite how this fits into the narrative. Eventually, the short story returns to a degree or normalcy, concluding with the engagement of Milly and Sandy and happily everyone in this quirky fiction is invited to the wedding.

This short story should have been placed at the beginning of the collection as it would have primed the reader for the tongue-in-cheek dialogue, ludicrous plots, the pithily optimistic endings, and the plentiful caricatures that populate the pages.

Unfortunately, poor decision-making with the short story order is a minor fault among a few major ones.

Chief among the detractions are the basic punctuation and name blunders which should have been ironed out in the journey from first draft to print publication. I counted a staggering twenty errors (in a collection of just 116 pages); this is shoddy editing and reflects negatively on everyone involved in the production of this book. At £8.99, readers deserve more. So too does the short story form which already suffers from an undeservedly poor reputation.

The second major flaw lies with the evident lack of a good editor. Take, for example, Ansbach’s tendency to splatter a page with exclamation marks. One of the short stories, ‘Goodies and Baddies’ is only seven sides in length, but it is saturated by over seventy-five of these punctuation poly-fillers.

Another significant short straw sits with the dialogue. Bravely, Ansbach tackles the difficulties of accents, but the language suffers from inconsistencies. Too frequently, a character’s use of ‘ter’ becomes ‘to’ and then reverts back again; ‘yer’ slips into ‘you’ and so on. Equally troublesome is the stock accents and stereotypes that are more at home on comedy shows like ‘Allo ‘Allo and Blackadder. There is a permeating use of ‘aint’ and phrases like ‘I say’ throughout the short story collection. Indeed, the language similarities between disparate characters extend to a ridiculous degree, as with the Frenchman Pierre’s diction in ‘Hot Rod’ (‘No, no zat eez not good for hangeling’) and the alien Samada, in ‘The Sweeper’ (‘Zer eez a shower room zat vay’). Meanwhile, in cringe-making contrast to these figures, the Nairobi-born Moses Matebele in ‘Cruise’ is given no trace of accent, but doesn’t bother with definite or indefinite articles.

Pleasingly, there are redeeming features.

‘Cat Scan’ is so daft it retains humour. The line (spoken by a cat), ‘My name is Debussy, because I am The Pussy’ is particularly remarkable. Likewise, the occasional revelation holds merit, as with the beginning of ‘Round and Round’: ‘They say the way to a man’s heart is through his stomach; I’d say knitting is a way to get you closer to the inner meaning of a woman!’ I remain puzzled but endeared by Ansbach’s fixation on double-barrelled names; we are presented with Rugby-Kenilworth, Berringer-Smythe, and my favourite, Margaret ffyfe-Frencham-Smythe, later shortened to Miss f-F-S. Quite.

The short story ‘Ruth Salinger’s Story’ is more consistent in pace and tone. Told in the first person, it spans the early recollections (and beyond) of a young Jewish girl, evacuated to South Beeswold during the Second World War. There is no attempt at accent, exuberant punctuation is diminished, while the narrative is logical, linear, and rather lovely. The nostalgic reflections maintain an honest tint combined with a poignantly witty, softly tragic tinge. It is markedly different from the other short stories in this collection and it is no surprise to learn that the piece is largely autobiographical.

Regrettably, the positive aspects of this collection are overshadowed by numerous examples of poor quality-control.

The writing is sometimes too contrived – in ‘Cat Scan’ the author tries to stuff the text with as many phrases and words beginning with ‘cat’ as possible (‘Catkin Gazette’, ‘catnip’, ‘Catatonic Catapults’, ‘Catalysts’, ‘Cat Estrophic Ward’, ‘Cataracts’, ‘catepillar’ etc.).

At times the description is unnecessary – ‘When Clary opened the taps, a toothbrush appeared. It was a thin stick with bristles’ (‘The Sweepers’).

The reader is frequently offered the curiously vague, as with ‘Discreet Brushing’: ‘My name is Hannah, I live somewhere in north London’ – somewhere? Amnesia, or just playing hard-to-get?

Most tiresomely, in ‘Tingaling’, an unusual and otherwise intriguing phenomenon lasting more than two-thirds of the short story turns out to be far less interesting: ‘Miles realised he’d had a very long dream’ (writing 101, surely?).

One might forgive an eighty-year-old woman who wants to test pen against page and leave something to posterity. To some extent one can also excuse friends and family who may feel obliged to provide positive feedback. The publisher has fewer excuses.

Gabriele Ansbach was born in 1935 and she has only recently turned her hand to fiction. ‘Ruth Salinger’s Story’, the highlight of this collection, demonstrates that it is never too late to begin writing. In many ways, it is an immensely optimistic message and if you’re looking to dip in and out of a truly odd assortment of short stories, then this short story collection is the book for you.