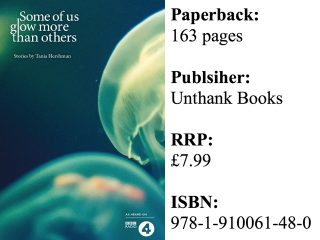 The Short Story Review: ‘Some Glow More Than Others’ by Tania Hershman

Anyone familiar with Hershman’s work will not be surprised by the quality of this superb collection, nor its primary preoccupation: science and its varied practitioners. The forty-plus short story and flash fiction pieces create a tender cacophony in tribute to the world of data-plotters, petri-dish experiments, and lab-coat lovers. The reader is afforded a glimpse into a world usually hidden by closed doors, technical language, and spreadsheet models. Hershman lights upon some of this mystery and discovery, delighting in the sensuality and playfulness of scientific syntax, while also acknowledging the tedious reality of repetition after repetition that is so necessary to research.

Two of my favourite short stories in this collection, ‘And What if Your Blood Ran Cold’ and ‘The House of Meat’ aptly explore these concerns, albeit in excitingly different ways. The former story steps into the realm of science-fiction (the tantalisations of resurrection ‘a sort of miracle, perhaps’), effectively maintaining three first-person perspectives through selective paragraph formatting. The latter text touches upon a science that sits closer to present-day probabilities – artificial meat, cultivated one cell at a time (a painfully slow process). Both stories step along the difficult lines of co-worker relationships (the driving force in most of these short fictions) and end on a partially positive note – provided by the wonders of scientific progress, if the not the engineers themselves. The prose generally avoids floral flourishes, the author favouring clear and concise sentences that mirror the clinical nature of the many experiments upon which Hershman casts her eye.

Of all the short stories, ‘There is No-One in the Lab Tonight but Mice’ is the most didactic, offering the blunt message that science is damn important and we ought to take note of these men and women who so rarely find themselves in the spotlight. These are the folks who deal with ‘treatments for cancer, heart disease, diabetes, obesity, blindness, deafness, trembling, stiffness, pain, sadness, anger, disappointment, despair; sources of energy for when ours run out; food for when what we have runs out; immortality so our lives don’t run out’ and more – the list goes on and on. Hershman delivers this point forcefully, wielding the truncheon of brute fact, and yet the reader isn’t bludgeoned blue without realizing it’s the kind of wake-up needed. The plot used to propel the story intriguingly (uncomfortably? self-referentially?) asks us to consider the real value of the arts and what relationship they have with science. If the people of pills and potions turned all their time to poetry and painting, where then would we be?

Hopping between the science-oriented matter, some short stories alight on alternative themes. War, and all the tragedy it brings with it, is a recurring concern in the collection – ‘War Games’ most explicitly so. This is a really phenomenal short story that begins with one of the best opening sentences I’ve read this year: ‘A little girl, 10 or 11, smoking a cigarette, plays Monopoly on a beach while all around her, a war is raging.’ I love the way we’re given the setting, the character, the tone, the intrigue, and the urgency within such a tiny space. There’s also the ambiguity and unreliability in the uncertainty over age. The rest of the prose is equally dense – our narrator remains sinisterly elusive (‘Did I promise only one truth?’); the little girl is both player and pawn; there are ghostly soldiers, games within games being played. And war – the bloodiest, most brutal game of all.

Other short stories which I particularly enjoyed – ‘The Special Advisor’ and ‘Octopus’s Garden’ – deal with death, contain same-sex-relationships, and circle around loneliness. ‘The Special Advisor’ is an odd short story which involves our hero being tasked with recording his thoughts whenever there is an execution in the world. It is a morbid piece that feels dystopian, almost Orwellian in nature, but the writing itself maintains Hershman’s familiarly spare style that forces the reader to dig between the lines. ‘Octropus’s Garden’ on the other hand, is more rhythmic, internal, literary. The story follows the daily work of a female diver who fishes after lost items and people beneath the water. She seems, in some ways, most at home in the solitude of the water, away from whatever demons and sad dreams pursue her: ‘Sometimes, when she wakes up in the middle of the night and can’t get back to sleep, she stands, naked, by her window, holding her wetsuit as a second skin.’

These interludes between the more science-centred pieces feel slightly out of home in this collection, but each one is carried by its individual excellence. The volume is further pick-a-mixed by the many flash fiction / prose-poem pieces – about twenty in total.  The inclusion of these shorter snapshots break the flow of the collection and reduce the cohesion (as someone who favours unity in collections, I’m admittedly biased on this score), but they do offer variety and show Hershman’s range as a writer. Given the limited print outlets for micro-fiction, the opportunity presented here must have been easy to snap up. Providing some order, Some Of Us Glow More Than Others has been divided into seven sections – Grounded, Flight or Flight, Telling Time, All Talk, Comings & Goings, Familiarities, and In Theory. It’s an unusual approach, but one that highlights that this a book breaking the trends (presently: publishers presenting collections as novels).

Regardless of questions of harmony, there can be no doubt of the mastery of some of these shorter cameos. ‘Flavours’, originally commissioned by London-based Spread the Word stuck with me for a particularly long time. ‘The boy and his father met, every Saturday, for ice cream’ – so begins the story, told in the simple style of a fable, yet containing remarkable profundity – capturing love, loss, and redemption in just a handful of paragraphs. Indeed, all the stories in this collection are brief, the longest stretching to no more than ten pages, demonstrating one of Hershman’s greatest qualities: the ability to say a lot in a little. While this is fundamental to any successful short story writer, it’s clear that Hershman has honed her craft to an absolute art.

As the title suggests, many of the short stories are concerned with a light – glowing, illuminating, radiating – that offers a glimpse, a revelation as it were, of something formerly unknown. There is a sense that this is what Hershman hopes to achieve herself with this book – her careful prose shining down on the world of science, of strange happenings and lonely souls who step into the darkness, to explore the world and the future that is before us, the further and better to see. Does Hershman achieve this? Absolutely.

Put simply, Some Of Us Glow More Than Others is a mind-bendingly good collection brought to us by the indomitable editors at Unthank Books. What are you waiting for? Go read it.

Some Glow More Than Others Can Be purchased Direct from the the publishers here.

Rupert Dastur is a writer, editor, and founding director of TSS Publishing. He studied English at Emmanuel College, Cambridge, where he specialised in Modernism and the Short Story. He has supported several short story projects and anthologies and his own work as appeared in a number of places online and in print.