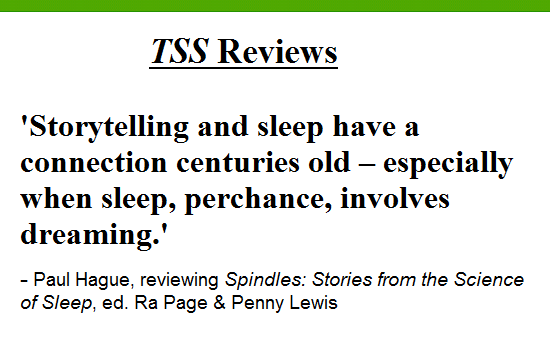 The Short Story Review: Spindles – Stories from the Science of Sleep

Storytelling and sleep have a connection centuries old – especially when sleep, perchance, involves dreaming. However science and fiction are not always the easiest of bedfellows (yes, pun intended). Spindles: Short Stories from the Science of Sleep, attempts to bring the two together.

Those already familiar with the ‘Science into Fiction’ projects from Comma Press will know what to expect: in Spindles, fourteen authors work with professionals who specialise in sleep to respond to research and new hypotheses into the study of slumber.

We may not usually turn to fiction to learn – that’s for those large heavy books – but the afterwords to the stories in Spindles are fascinating and add an extra layer of depth to the writing. Sometimes these comment on the likelihood of more speculative stories – the ‘could this really happen?’ – others offer interesting insights into the topic: narcolepsy (which means ‘seized by sleep’), sleepwalking (it effects 2% of adults and 10% of children), and REM (we have four or five cycles of this much discussed, and little understood, vivid dream bringing stage each night). Furthermore, next time someone tells you that they have not slept in days you can call them up on it (we can have a series of small sleeps without even realising).

The collection begins with Martyn Bedford’s modern day Sleeping Beauty tale of hypersomnia. One of many stories to be set in, or feature, sleep clinics. The story follows, with touching irony, the gaze of a Sleep Technician, working at night to study the slumber of another, and examines the building of a relationship to a person who is predominantly unconscious.

This is followed by Adam Marek’s tale of Targeted Memory Replay in treating post-traumatic stress. Like much of Marek’s writing (and his two story collections The Stone Thrower and Instruction Manual for Swallowing are well worth reading), this is elevated into the strange and the wonderful: the subjects the protagonist works with are monkeys who have been sent to space, as test subjects for surgical procedures in zero gravity. The ideas involving the link between memory and emotional response are interesting but perhaps the story’s greatest impact lies at a more down to earth level, with the ethics of harming animals for scientific progress.

Although all the stories focus on sleep, Spindles features a wide variety of sub-topics and writing styles: from Zoe Gilbert’s dark and atmospheric Gothic tale of sleepwalking, ‘Thunder Cracks’, to, ‘The Trees in the Wood’, in which Lisa Blower takes a more domestic examination into the variety of causes and effects of sleep deprivation: through Laura’s anxiety (and prescribed wakefulness) and, long suffering friend, Mia’s lack of sleep due to the pressures of life.

The final story in the collection, ‘The Raveled Sleeve of Care’, nods to the scientists of writers such as Stevenson (Dr Jekyll) and Wells (Dr Moreau), as the narrator recounts three meetings with the wonderfully named Dr Slechterschlaf. Google translate informs that, as suspected, this is indeed a joke. “Dr Badsleep” believes he can rid mankind of the need to sleep. It is no surprise that, as with the experiments of Jekyll and Moreau, this way madness lies.

This is perhaps an interesting place to end the collection as we come full circle, to examine the traditional literally view of the scientist: they meddle with nature and God, and chaos ensues – there is such a thing as too much knowledge. Spindles offers an alternative view. Often the scientific truth is as wonderful and mind-bending as any fiction: enlightening, engaging and entertaining.

Being a pre-sleep night-time reader, the irony of reading short stories about sleep was not lost. A minor criticism of this sort of project is that some of the stories felt as though they may have started with a list of sleep research to be included, which can disrupt the narrative. Also, the afterwords to the stories, though interesting, did pull out from the world of the story. Almost like the explaining of a magic trick. My preference soon became to read a story at night and then the afterword the following day. However on the whole, science and fiction exist harmoniously together, with scientific research driving the fascinating ideas of the tales.

As a not-for-profit publishing initiative dedicated to promoting new writing, with an emphasis on the short story, Comma Press should be a publisher of note for those who support the short story. Also, by heading over to their website (www.commapress.co.uk), a link can be found to a free audio version of the story ‘Counting Sheep’ from the collection.

Spindles is an entertaining and touching collection of stories by talented and imaginative writers. It will likely change the way you look at, and the importance of, sleep. And as we all know, there is no better way to unwind and prepare for a good night’s sleep than to turn off the computer/television/phone and pick up a good book.