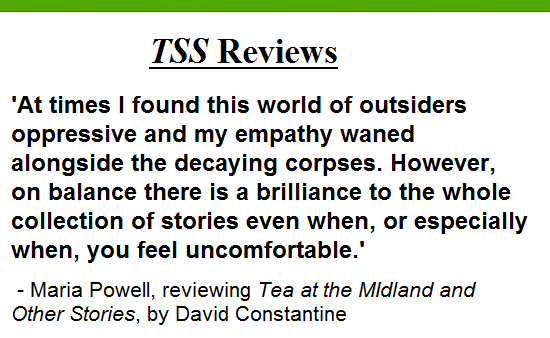 The Short Story Review: ‘Tea at the Midland and Other Stories’ by David Constantine

After watching the acclaimed film 45 Years, adapted from one of David Constantine’s short stories, ‘In Another Country’, I was quick to buy my first collection by him. The film had made an impression on me with the slow build up of tension between the main characters, Kate and Geoff. Their anniversary celebration brings their relationship under the microscope, and the question shifts from whether the celebration might be cancelled, to whether their long marriage will even survive the week

I chose the collection, Tea at the Midland, David Constantine’s fourth short story collection; the title story was the winner of the BBC National Short Story Award 2010. I was drawn in straight away by the evocative prose which opens with a woman watching surfers from the hotel window and I floated along with the first description,

’to the woman watching they looked like grace itself, the heart and soul of which is freedom. It pleased her particularly that they were attached by invisible strings to colourful curves of rapidly moving air.’

The man was in a different frame of mind, ‘all he saw was the woman, and that he had no presence in her thoughts.’ The inner life of people is masterfully portrayed throughout the book, for this is where the heart of these short stories lie.

The protagonists in Tea at the Midland are unnamed. They are simply addressed as the man and the woman, which made me feel like a fly on the wall. Constantine explores feelings. He has that ability that only great writers have to reach the very soul of humanity. The lack of names adds something by enhancing the pathos so that you become sucked into their private lives, and at the same time, you are made to feel like an intruder

Not all the stories worked for me though, and some of the characters were nigh on impossible to warm to, such as Goat, who ‘had a broken nose, crinkled and soiled grey hair, some teeth and, yes, knobs on his forehead.’ You are given a glimpse of the horrors of life through this very troubling story where two unsavoury people meet at the derelict Bluecoats school which is awaiting demolition. ‘There lay the corpses of rats and pigeons, more or less gnawed or decomposed, the fixative of ice.’ At times I found this world of outsiders oppressive and my empathy waned alongside the decaying corpses. However, on balance there is a brilliance to the whole collection of stories even when, or especially when, you feel uncomfortable.

You quickly appreciate that Constantine is a great poet because his descriptions are breathtaking. Take this one as an example:

‘on deck lie the browning women, upright the redswart mensfolk, turning the sizzling meat, their midriffs melting over the trunk-tops, their bare domes, angry as boils, dripping into the grill. Flesh, so much flesh, cooking or being cooked, oozing a living sweat or the juices that still moisten the dead meat.’

In an interview in The Scotsman (1/12/12) Constantine said, “I think that if you try to write poems it makes you very attentive to language. It also makes you quite impatient of language which is merely instrumental, which is just saying this happened, then that happened, to get you from this point to the next.”

Constantine never writes plot driven stories, instead the stories focus on people living on the margins and their inner lives. Character is all. Be prepared to find them trapped in terrible circumstances, mental health and terminal illness are themes threaded throughout the stories, but they do not give up on that precious bit of life that is still theirs to live. And sometimes this precious piece of time is the only thing that they still possess. In ‘Ayery Thinnesse’, ‘she’s had enough, but that’s not the same as giving up,’ and In Lewis and Ellis, ‘the end, or the beginning of the end, came in winter six weeks after the lung cancer Ellis had been breeding for many years finally outed itself…’ Ellis is incensed by the way the news is delivered, ‘Given three months to live. Given!’ – a brilliant sentence showing great strength in this character who challenges the choice of words of the doctors.

These quirky individuals battle with their gruesome lives where lesser mortals would simply cave in; and this, I believe is the whole point to the book. The most admirable characteristics are the drive and determination to get through the day. In fact, Constantine leaves us in no doubt about how tough life can become when he writes, ‘the heart of life is horror’ and, ‘what you think can’t possibly get worse always can and very likely will.’ This is the stark message, but with a clever flip side of hope running throughout. It is clever because it is never implausible. The characters struggle to live the best possible way they can, and get the very best out of their time, living moments of joy even though they may be ever so brief. The idea of hope and determination made the read worthwhile and rewarding. But, let’s make no bones about it, you have to work at reading these stories, at times, very hard indeed. Many of the stories leave you to make up your own mind about what really has happened and what might happen next. Constantine once said, ‘I detest the idea of closure, in life and in writing,’ and so he makes these outsiders battle against the odds, always searching for some kind of redemption, some kind of relief, but most important of all in my opinion, with the drive to live whatever time is left intensely.

Maria Powell took an Open University course in creative writing where her love of poetry and short stories was rekindled. Over the years she has been placed in Flash 500, Fish Publishing and the Bath Short Story Award. In 2013 her story entitled, ‘The Pig’ was published in a short story collection by Hearst Magazines UK. When she’s not writing she teaches Italian to 25 mature students, she enjoys cycling to the local Pub, kayaking across Poole Harbour, and eating out with friends in some of Dorset’s finest restaurants.
Type to search or hit ESC to close