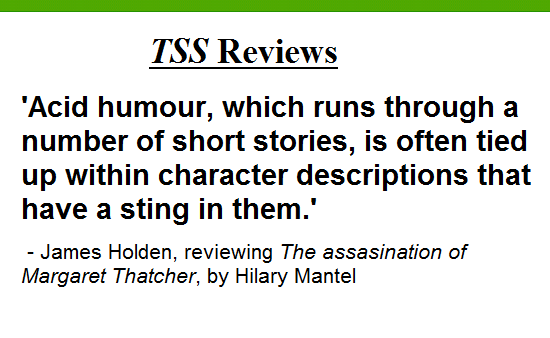 The Short Story Review: ‘The Assassination of Margaret Thatcher’ by Hilary Mantel

It isn’t often that short stories break out of review sections and into the news – it mainly happens twice a year with announcements relating to the Costa Prize and the BBC Short Story Award. A Hilary Mantel short story, ‘The Assassination of Margaret Thatcher: 6 August 1983’ has been the only recent exception to this. The story – whose events are indeed what the provocative title suggests – made the news and generated critical headlines in the right wing press (the Daily Mail referred to it as ‘Mantel’s twisted fantasy’). Even the story behind the publication of the story created column inches: it was originally picked up for The Daily Telegraph before being by spiked by editors, nervous it would offend their readership.

The provocative title was also lent to this solid and occasionally outstanding collection of 11 short stories, nine of which have previously been published at various intervals since 1993. Despite the 21 years that pass between the publication of the oldest and most recent stories here, they are tied together, primarily, through being told from a vantage point years after the events recounted took place.

This is signalled in the title short story when it sets the scene to help the reader understand what the Windsor streets looked like in 1983 – a time when ‘England had not succumbed to the smell of burning. The carbonised reek of the weekend barbecue was unknown…’

The sense of the past in this story runs deeper than the wistful description of Windsor, though. It opens with the announcement relayed by the Prime Minister that the Falklands Islands have been retaken. An explanatory note creeps in at one point, telling ‘those of tender years’ what polytechnics are. The narrator notes that Thatcher’s certainties and the way people coalesced against her meant that ‘I’d been thinking, we don’t know it now, but we’ll look back with fondness on the time Mrs Thatcher was here.’

This is not a short story with a twist: the culmination of events is signalled by the title, and if you thought it might not be literal, it’s confirmed in the poetic first line: ‘Picture first the street where she breathed her last.’ Discussion about the story has focussed more on the appropriateness of the subject matter than around the artistic merits, which is a shame because it’s a deft piece of storytelling – almost tipping into a comedy of manners – that successfully considers what motivates hatred of public figures in general, and specifically hatred of Thatcher:

The opening short story, ‘Sorry to Disturb’, is similarly set in 1983, and also features a fleeting reference to Thatcher. The retrospective storytelling is highlighted through a review of entries made in a diary (‘He doesn’t reappear in the diary till March 17th, St Patrick’s Day, when I recorded, ‘Phone call, highly unwelcome’.)

‘Comma’ more fully explores what nostalgia does to us. It looks at how local stories develop into urban legends – the existence of the ‘animal wrapped in a blanket’ at a large home that is strictly off-limits to the local children, and how a story about a looked-down-upon neighbour spat in a stew offered as an act of charity has continued to be told and assumed legendary status:

‘If it weren’t for the persistence of this story about Sheila Joplin and the stew, I would have thought, in later life, that I had dreamed Mary.’

Within this preoccupation with the past, the collection covers a lot of ground: anorexia, car accidents and rape all feature. Infidelity is explored in two short stories – one at the beginning of an affair (‘I meant to ask her to be French’ the protagonist exclaims), and one at the end (‘it’s a long time now since he was subject to urges of the flesh’).

These are not stories focussed on a big reveal at the end – they mostly signal what’s going to happen within the first couple of lines of the opening. Instead they are about the journeys characters make towards the signalled conclusion.

They also tend towards using the first person, and the use of a narrative voice that is remarkably consistent does make you wonder how many of them are based on actual reminiscences. She has acknowledged in interviews that she was able to see Thatcher when she was discharged from hospital in Windsor in 1983. ‘Sorry To Disturb’ is set in Jeddah, where Mantel herself lived, and the protagonist is also an author, which is also true of ‘How Shall I Know You’, where a novelist-turned-biographer is invited to address a book group.

This short story is bitterly funny, and is at much a paean to grotty accommodation as it is to the struggles of writing. She notes that:

‘I never cared where I stayed as long as it was clean and warm. I had of course stayed in places that were neither. The winter before there had been a guesthouse in a suburb of Leicester with a smell so repellent that when I woke at dawn I was unable to stay in the room longer than it took me to dress.’

The accommodation the book group place her in smells of the

‘tar of a thousand cigarettes, fat of ten thousand breakfasts, the leaking metal seep of a thousand shaving cuts, and the horse-chestnut whiff of nocturnal emissions.’

This acid humour, which runs through a number of short stories, is often tied up within character descriptions that have a sting in them somewhere. One man has a ‘weak mouth… Almost a handsome man, but not: sallow, easily thrown.’ A woman is described as ‘round, kind, downmarket for the area and easy to like.’ Best of all is a taxi driver who:

‘laid a hairy, proprietorial hand on their baggage trolley. He was a squat man with the regulation moustache, and he wore a twill jacket with a tartan lining peeping from under it; as if to say, forget your sunshine illusions.’

Mantel perhaps takes this a bit too far in ‘The Heart Fails Without Warming’, about a dysfunctional family struggling to cope with the anorexia of their daughter, Morna. Each family member throws out critical comments about Morna’s condition (Dad: “All she has to do is open her mouth and put the food in and then swallow. Don’t tell me she can’t.”), especially the younger sister, who at one point compares her unfavourably to an early-man skeleton that’s dug up. For a short story tackling such a sensitive subject, the cruelty made empathy for the family exceptionally difficult, despite the strain the anorexia is obviously placing on them. Reading about mental illness can be uncomfortable anyway, but here that sense is exaggerated beyond a sensible point.

Occasionally the impact of these short stories is dimmed by the number of threads that Mantel weaves through them – this is especially true of the opening story and ‘Harley Street’, both of which seemed to have a number of points of focus. But ‘The Long QT’, ‘Winter Break’, ‘Offences Against The Person’ and the title story itself are all first rate short stories, making this an enjoyable collection that is more than the sum of its parts.