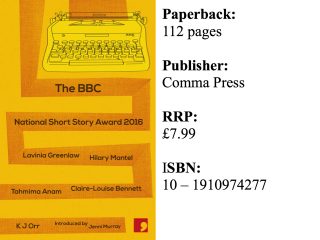 The BBC National Short Story Award reached its eleventh year in 2016. Backed by BookTrust, the award’s mission is to “expand opportunities for British writers, readers and publishers of the short story”. The five shortlisted stories were also broadcast on BBC Radio 4 (the world’s biggest commissioner of short stories).

The anthology begins with an interesting introduction from Jenni Murray (chair of the panel of judges), who admits she was “never a fan of the short story” – a slightly odd comment. Perhaps this shows, and I hate to admit it, that the short story is often a hard sell, even to avid readers. The panel also featured Booker prize winner Pat Barker, writer Kei Miller, Literature & Spoken Word Programmer at the Southbank Centre – Ted Hodgkinson, and Di Speirs – Books Editor at BBC Radio.

Garments, Tahmima Anam’s tale of ‘garments girls’, delves straight into the humid conditions of a Bangladesh factory, and the lives of those who work in this environment. Through the story of three women who share an impotent husband, we are shown a patriarchal world and left with a cryptic hint of the strength of female solidarity. The juxtaposition of the makers of clothes, and the wealthy western buyers is highlighted through the jokes on the production line, leaving a subtle but lasting impression.

Morning, Noon & Night, by Claire-Louise Bennett, begins with an instructional tone, which is quite frankly brilliant. The early pages detail intricate, self-imposed, rules of breakfast, in obsessive compulsive glory:

“Be careful though, be very careful with flaked almonds; they are not at all suitable for morose or fainthearted types and shouldn’t be flung about like confetti because almonds are not in the least like confetti.”

It becomes a tale of past gardens and cottage life. Yet underlying this is a sense of panic, a wistful slow mania – of things unfinished; of unfinished loves. An unspoken loneliness echoes through the story. I found this to be a highlight of the collection, though the rest of the story never quite maintains the perfection of the first pages.

The Darkest Place in England by Lavinia Greenlaw: a tale of female adolescence, chance meetings, coincidence, and a bunch of flowers. We follow fifteen-year-old Jamie on her first night out, with Piper “who is also fifteen but looks twenty” – a transformation of halter-neck tops, dance music and vodka. The excitement and danger, of boys, reckless driving and country lanes, is skilful captured. The glamour and grubbiness of the small-town nightclub feels as real as a reminiscence. There are a couple of moments of contrived coincidence, and the reader does not need so many reminders that Piper is no real friend. Twice, the narrator’s voice appears in brackets, which moves the reader a step back from something that feels very tangible. These criticisms though are only pointed because of the excellent nature of the underlying story telling. The starry skies of the moors, the insipid shots of spirits lined up on the bar, all weave an astute, compelling and touching tale of adolescence, and will especially resonate with anyone who spent teenage years in a place where a single bus or lift was often the only way out.

Booker winning Hilary Mantel will likely be the most known author of the shortlist. In a Right State presents a ragtag community of characters in an A&E waiting area. Told by an elderly lady, who we assume is homeless, it opens an interesting world, but the exploration feels like an initial assessment rather than a treatment. A clear political point is being made about times of austerity and those in society who are left behind. However, the aim seems to be Beckett but the result feels more like Last of the Summer Wine. In the introduction, Murray states that the story “grows funnier each time you read it” but reading the story a second time did not change my view.

Disappearances by K J Orr. A recently retired plastic surgeon in Buenos Aires goes for coffee in a local cafe. The same woman serves him each day but they scarcely communicate: he expresses pleasure in the woman not knowing who he is. The comfort of his retirement and the background of a country where “not everyone has had my easy run through the years” are highlighted by her mention of her father’s disappearance. She discovers he was a surgeon and treats him as a hero, not realising his work was cosmetic for the rich. He does not want this to bother him – “What does it matter what she thinks I did, the sort of man she imagines I have been?” – but clearly it does.

The narrator watches a wealthy friend act rudely and leave without tipping. On a later occasion, he cannot hide that he is a friend of this person. As he leaves, for what we assume is the final time, unable to keep this bond now exposed with falseness, he leaves exact change and allows the door to shut behind him. The poignancy of this act shows a world where people cannot change from their past selves, nor hide from the shadows cast by former actions. It is a beautiful lesson in the human relationships which do not allow themselves to form. The story ends with a sterile, surgeon’s description of the waitress. Though unemotional, it pulses with a heavy heart behind a calm persona. These final pages show the finest writing in the collection.

So, do these stories represent the zeitgeist of the form? They clearly show writers at the top of their game and present an impressive dexterity with the short story. Fiction so deftly honed that it often feels more like observation than fabrication. However, there is not a sense of the avant-garde, or the stretching of the form. What is displayed are five examples of poised prose looking at moments of connection (or lack of) and the search for escape.

Further information about the award and the winner can be found at the BBC website. 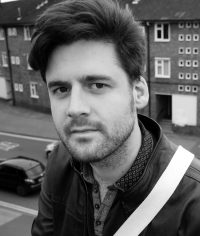 Paul Hague lives in Cambridge and works in publishing. He studied for an MA in Writing at the University of Warwick and now spends much of his free time writing – except for when distracted by guitars, art and whisky. His reading pile usually contains short story collections, the odd graphic novel, and twentieth century American literature.

We run on love and coffee. Help support TSS Publishing and our coffee addiction by donating here.