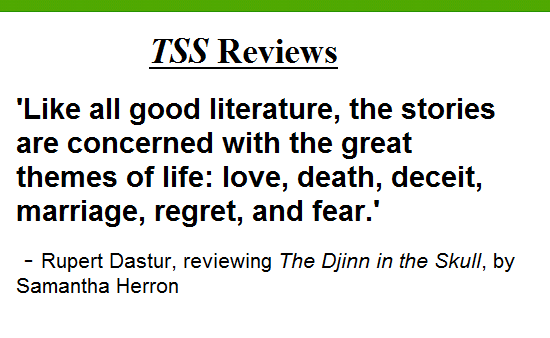 The Short Story Review: ‘The Djinn in the Skull’ by Samantha Herron

Samantha Herron’s debut short story collection, The Djinn in the Skull, provides a glimpse into a world filled with magic and myth. Having spent time with a family of former nomads in Morocco’s Draa Valley, near the Sahara Desert, Herron is well-placed to open a fictive door into this extraordinary setting.

The fifteen tales in the collection are short and simple, but pack plenty of action into the prose. Like all good literature, the stories are concerned with the great themes of life: love, death, deceit, marriage, regret, and fear. The swift-moving and sparse language, influenced by Herron’s encounter with Morocco’s oral tradition, make these stories perfect for parents looking for something to read to their children.

The characters are diverse, with old and young, men and women, invalids and the healthy all finding voice. The collection also serves a range of moods, offering light humour to balance darker tales.

Regrettably, the quality of the writing is mottled. Short stories like ‘Back from the Dead’, ‘The Blind Man’ and ‘The Djinn in the Skull’ maintain unity of effect and theme, providing confrontation, change, and resolution. They point to the writer’s evident potential. However, some stories lack cohesion. ‘The Djinn in the Tree’ changes perspective and emotive focus so frequently that it becomes a disorienting muddle. As with other short stories, it also suffers from too much telling rather than showing.

Often, the description lacks discerning detail. The most generous depiction appears in the short story ‘Missing’ which portrays the character Mohamed as

unnaturally thin and much younger than Ali had at first thought. Underneath his beard and long knotted hair, Ali could see the face of a young man.

Aside from repetition, there’s nothing drastically wrong with this, but it is bereft of the imaginative and poetic force one expects in short stories. Occasionally, the writer stretches for more creative prose, but this has mixed results. In ‘Larbi brings the News’ the central character is introduced:

A man appeared at the doorway and walked into the middle of the room. He looked like a child who happened to find himself inside an old man’s body

The troubling word here is looked. Does Larbi look like a child or an old man? Or is he middle-aged as the story suggests? Clearly, what the author implies is that Larbi is an old-looking man who acts like a child, but the sloppy word-use creates an unnecessary paradox. A similar fault can be found in ‘A Guest in their Home’ in which spectres appear in Rqiyya’s bedroom:

Rqiyya heard herself scream. She was looking up at an old man and a group of old women, who were floating above her head with their backs pushed up against the ceiling. They were neither naked nor clothed. They were talking quietly amongst themselves and didn’t appear to have heard her screams.

While we might beneficially cut the first sentence in half to ‘Rqiyya screamed’, there are more pressing concerns here: how many of these old women are there? Why are they floating in a yoga-like position, with backs pushed against the wall? And what, one wonders, does being ‘neither naked nor clothed’ mean? Feathered? Or perhaps furred?

This quirkiness is rare, but the alternative is generic writing with little individuation; most stories are set in ‘the desert’, ‘the village’, ‘the town’ or ‘the courtyard’. Indeed, it’s only with the help of the cover and the blurb that one knows that these short stories are actually set in Morocco. Testing this assertion, I gave several of the stories to friends and asked them to locate the action. The results were various and vague and included the Middle East, Africa, Saudi Arabia, and Egypt. Morocco wasn’t mentioned once. The cover’s claim that the collection offers ‘stories from hidden Morocco’ is ironically apt.

It is a great shame that this setting – which offers such immense opportunity – is not capitalised upon in the manner of, say, Rodge Glass whose collection Love Sex Travel Musik spans continents and cites and jungles with dizzying colour and vivacity.

Herron’s beige landscape is populated by characters which are all varying shades of magenta. The men and women natter, travel, barter, drink tea, sleep, and pray. God is never from their mind (receiving more than eighty mentions in as many pages) and neither is family. They are open to revelations, though these tend towards the obvious rather than the profound. The former is most evident in the short story ‘Aziz gets Engaged’ which ends with the young man looking at his bride-to-be:

Only God knew what lay ahead for them. But Aziz knew that whatever happened, nothing would ever be the same.

We’re a far distance from the Joycean epiphany.

This is a hit-and-miss collection which would have benefited from the eyes of a professional editor. Nevertheless, there are gems that shine through. These include an amusing tale about a blind man looking for his wife among a group of sleeping women, a befuddled barterer haunted by a braying donkey, and a subtle tale about a young boy who disturbs the dead. In these stories the style is simple, the meaning clear, and there’s a pleasing lyricism and mood created throughout. If you’re hoping to peer into the Moroccan soul, I would suggest looking elsewhere, but if you want a quick and easy read to fill an hour or so, then The Djinn in the Skull is a suitable choice from a début author.