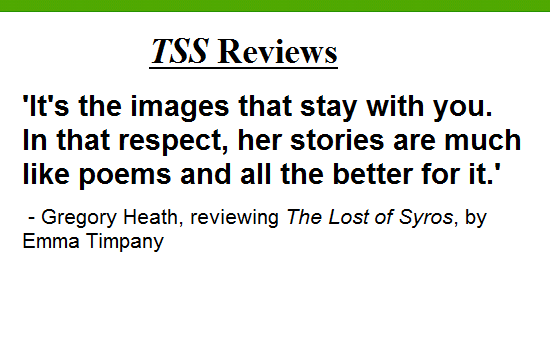 The Short Story Review: ‘The Lost of Syros’ by Emma Timpany

Critiquing the short stories in Emma Timpany’s debut collection is not the easiest of tasks, as suggested by a reference in the endorsement notes to the ‘indefinable quality’ of her writing. The author Rupert Wallis attempts it by describing her stories as ‘little windows into life, showing you things to think on long after you have finished reading’, and it’s the latter part of this comment which is most telling. Timpany’s stories are generally light on narrative action, working instead through rich description and distinctive images, and it’s the images that stay with you. In that respect, her stories are much like poems and all the better for it.

Now living in the UK, Timpany was born and grew up in New Zealand. Many of the stories are set there, and a number of them revolve around fellow New Zealander and renowned exponent of the short story form, Katherine Mansfield. ‘Painting Katherine’, for example, is ostensibly the story of when the writer, recovering from a bout of pleurisy, was immortalised on canvas by the American artist Anne Estelle Rice. A clever piece, it’s a vivid minimalist portrait of Mansfield, capturing her essence as strikingly as the painting itself. (I do think the notes explaining the background to the Mansfield stories might have been better placed with the stories themselves, rather than at the back of the book, but that’s a minor quibble).

There isn’t a single weak story in ‘The Lost of Syros’, though that’s not to say they are all equally good. One or two of them contain phrases which don’t quite ring true for me, and there’s an occasional sense of intrusive autobiography, a feeling that Timpany has perhaps not extricated herself fully from the prose. But even these stories offer something special by way of compensation, whether it’s the subtly constructed touch of menace in ‘The Glasshouse Mountains’ or the beguiling hints of animism in ‘A Walk in the Forest’.

There are many highlights here, too, not least the collection’s title piece. The last and longest story in the book, delivered with a cool detachment that belies a complex emotional undertow, it contains several of those aforementioned images which speak directly to the heart and linger there. Through these images – a sandstone memorial on a dusty verge, a simple leather bracelet worn away to nothing – Timpany shares with us a deep awareness of many kinds of loss, and she leaves us wanting to see more from this very fine writer.