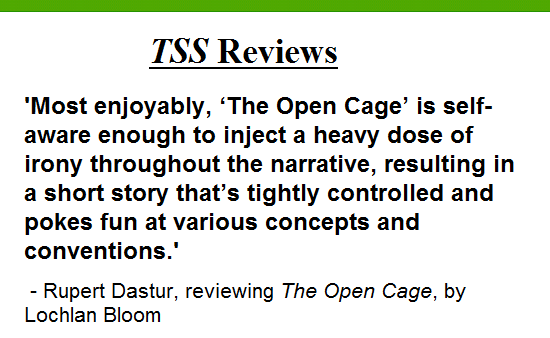 The Short Story Review: ‘The Open Cage’ by Lochlan Bloom

Bloom’s short story ‘The Open Cage’ is a mysterious piece of roughly 3,500 words. The story is told from the first person perspective of an expedition leader, guiding a group through that well-known trope, the ‘god-forsaken’ jungle. On their journey, they stumble on what becomes the central image of the short story: an enormous, rust-ridden cage, overgrown with dense vegetation.  To the consternation of our hero, the door of the cage has been left open, suggesting ‘a thousand unwanted possibilities’. Awed by the spectacle, he asks the attending Artist to make some sketches of the contraption.

The narrator, explorer, philanderer, (closet?) homosexual, and artefact trader, is haunted by the image of this gigantic iron structure which reminds him of a disturbing incident of animal cruelty at a circus he once attended (in a roundabout turn of events) at Rennes.

The extended flashback, which sits parenthetically between the framing narrative, makes for uncomfortable reading as first wolf, then bear cub, then lion, are brutally savaged by the Ringmaster. Adding to the horror, we’re told the audience is delighted by the mutilations, with ‘the lady-folk’ being ‘amongst the most appreciative’.

Returning to the cavernous cage (a surprisingly significant word count is used to explain just how big it is), the narrator orders some fires to be made in order to establish a better understanding  of the cage’s dimensions. In an unexpected turn of events, delivered with just a few lines, the fires are too-hastily made and ignite the surrounding area, forcing the group to flee. After a passing reference to further travelling, sickness, and death, the diminished troupe eventually reach ‘civilisation’ where they duly wreak havoc.

Through all this, the cage remains at the forefront of our narrator’s thoughts. Evidently, there’s something deep and meaningful going on here. Fortunately, lest any unwary readers haven’t noted the abundant symbolism, the Artist reappears in timely fashion to explain to the nameless protagonist (and us) that the cage ‘symbolized a certain truth for him about the human condition, a certain inescapable facet of our nature.’ To reinforce the crux of the matter, the following sentence is obligingly italicized: ‘We put so much faith in free will, he said, but is there anyone who truly believes in it?’

You might well wonder what this means. I certainly did. So, too, does the narrator and he rightly asks the Artist to explain himself. However, as with all the great mystics, prophets, and soothsayers, plain speaking is not on offer. Instead, we’re given half-sentences and riddles, or in this case the excuse that ‘some things we are not meant to understand.’

The biography at the back of the pamphlet explains that Bloom is a writer who blends ‘meta-fiction, magic realism and existentialism and focuses on themes around the nature of reality and perception.’ All these things are evident in this short story, which is sometimes over-written, but generally well-written. It is an interesting and entertaining story that deserves several readings.

Most enjoyably, ‘The Open Cage’ is self-aware enough to inject a heavy dose of irony throughout the narrative, resulting in a short story that’s tightly controlled and pokes fun at various concepts and conventions.

Bloom is an accomplished writer and I look forward to reading more of his work in the future.