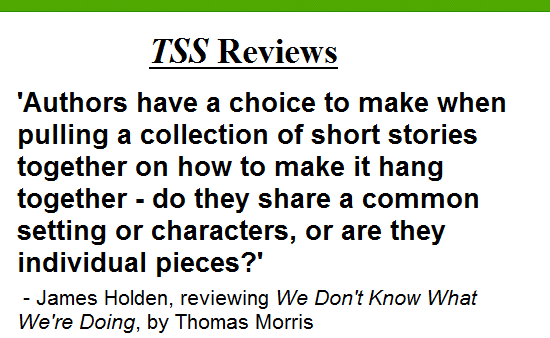 The Short Story Review: ‘We Don’t Know What We’re Doing’ by Thomas Morris

Authors have a choice to make when pulling a collection of short stories together on how to make it hang together – do they share a common setting or characters, or are they individual pieces? Thomas Morris has chosen to set nine of the ten stories in his debut collection, We Don’t Know What We’re Doing, in the Welsh town of Caerphilly.

Morris, the editor of Stinging Fly magazine, currently lives in Dublin, but he grew up in Caerphilly. The town he describes is dominated by a castle and a mountain that looks like a “big Christmas pudding”. It’s also as down on its luck as its inhabitants: the “shop across the road from New Look is boarded up. Posters for a travelling circus are pasted to the boards. To the best of your knowledge, a travelling circus has never passed through Caerphilly, but whenever a shop closes down, a poster advertising one always appears.”

The stories in this collection are well crafted, featuring well-sketched out characters with very personal dramas, wry humour and cracking dialogue. But Caerphilly is not the only thing that ties the book together, as loneliness pervades each of the stories. Characters have been stranded in the town by their long time partners, imprisoned by their sexuality, and in one case struggles to cope with the removal from his children caused by his own death. But many of the stories focus on their attempts to break free from loneliness. As one widower on the hunt for love says, “where was the point in going lonely all that time?”

Loneliness is perhaps an emotion that is underexplored in (short) fiction, but it is an exceptionally powerful one and Morris explores every aspect of it. Throughout the book we get to explore the loneliness that can come with being in a relationship, being a teenager, returning to your hometown, being a widower, and from falling through society’s cracks. All this combines to make the book rewarding and interesting, albeit one which is relatively downbeat: the tone can often feel too similar from story to story, and a little more variety might have helped throw the emotional depths he plumbs into greater relief.

The tone is set by the opening story, Bolt, in which Andy, living with the mother of his ex-girlfriend, works his last night in the video store before it closes, and is propositioned by an older woman into going to back to hers to watch The Apartment. It’s an offer he can’t refuse as the alternative is “meat and vegetables going cold in the microwave, the gravy congealing”.

When Shirley MacLaine says to Jack Lemmon, ‘Shut up and deal’, we’re both in tears. The psychiatrist wipes her eyes with her sleeve and goes back to the kitchen. She comes back with another bottle of wine, pours us large measures, then starts talking about her first husband. She says the marriage was emotionally demanding. I don’t know what to say, so I edge the conversation back to her job. She tells me how draining she finds it. I ask her to diagnose me, and she laughs.

‘I’m not very good at guessing personality types, Andy. That’s not how counselling works. You seem a very nice boy, though. And that’s a professional judgement, by the way.’

The psychiatrist spends the early part of the story pretending to be a horse, raising the prospect of a Twin Peaks-esque town of eccentrics that is sadly only followed through with a couple of later characters: a woman that only has sex whilst wearing masks of famous actors, a boy overcoming teenage rejection wrestling older women in the castle grounds. The rest of the characters in the book are all thoroughly grounded in reality and their own misery.

The only story that doesn’t have such a grounding is the closing Nos Da, requiring the reader to pick away and determine exactly what kind of reality Morris is spinning. When he’s not making people Memory Tapes, Richard spends his spare time not devoted to his new girlfriend, but instead at a local Viewing Booth: “Once he’s through security he hurries to the lift and finds an empty booth. Onscreen his kids sit at the kitchen table with their cornflakes, and Karen stands by the radiator, her hands holding its rim.”

Morris shows himself at his most assured in the energetic All the Boys, telling the story of a riotous stag weekend in Dublin. Writers are normally encouraged to include as few characters as possible in short stories, but he skilfully juggles seven characters, each of whom are taken on different journeys over the three days and two nights, and afforded the space to breathe over 24 pages. The emotional heart is not where you expect it to be located, and ultimately explores the loneliness that can come from trying to blend in with a group.

It’s a well-observed story, not just in terms of the activities of the group of lads – the drinking games, the fancy-dress outfits that can come with these occasions, the interplay and banter, but also the eye for detail that helps to make We Don’t Know What We’re Doing Together such a good read:

“Saturday, the hotel room smelling like sweated alcohol and men, heavy tongues will wake stuck to the roofs of dry mouths. Set up a microphone, and this is what you’ll hear: waking-up farts and morning groans; zips and unzips on mini-suitcases and sports bags; the library-shhhhhhh of Lynx sprays; and the sounds of the bathroom door opening and slamming, its lock rotating clockwise in the handle. Pop your nose through the door, and this is what you’ll smell: dehydrated shit mingling with the minty hostel shower gel in the hot steamy air. And back in the room, more sounds now: the beginning of last night’s stories, the where-did-you-go-tos, the how-the-hell-did-I-get-backs, and Larry inviting the boys to guess if the skin he’s pulling over his boxers belongs to his cock or his balls.”

Morris’ unfussy, straightforward writing style perfectly matches the stories he’s chosen to tell and one of the real joys of the book is the quick and wry character sketches that populate the stories. A woman has an accent that sounds “exaggerated, the kind you’d get on a tourism advert or a poorly done BBC Wales sitcom.” A boy “always looks perturbed. His father was obsessed with germs and made him change his bedding every day.” Perhaps the best description is someone’s long lost Mum, who “had scraped back short hair, and looked like she’d seen things. Things that were unlikely to appear in the Radio Times.”

The humour that frequently underpins descriptions of his characters also appears in his realistic yet engaging dialogue. Some of it is reminiscent of the wordplay that characterises Lorrie Moore’s writing: when a Dolly Parton cd is put on, there’s a debate about whether it’s “Greatest Tits” or “The Breast Of”; a character wearing a potato fancy dress costume is asked if they have “‘a chip on your shoulder, do you?’” One characters laments that: “‘I can’t believe we’re twenty-seven. Innit sad thinking about all the things we’ll never do? I was thinking about it the other day. Like, at this age, I’ll never be a victim of paedophilia.’”

These touches of character and dialogue prevent the stories from wallowing in their own misery. With a couple of exceptions, it’s not a life-affirming collection, but it’s difficult not to be affected by the characters’ easily recognisable travails. On the strength of this book, Thomas Morris has a much brighter future than the one he affords to the population of Caerphilly.