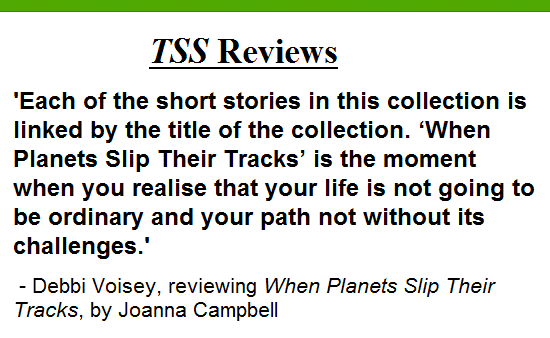 The Short Story Review: ‘When Planets Slip Their Tracks’ by Joanna Campbell

Once in a blue moon you pick up a book of stories and from the first few paragraphs, you know you are going on an exciting journey – or several exciting journeys. When Planets Slip Their Tracks by Joanna Campbell, is one such collection. This is her first collection of short stories, and all of them have either won prizes or have been published previously in various anthologies or magazines. Her considerable pedigree shows.

The most fascinating people to watch are those whose lives are – for whatever reason – on the verge of imploding, or just about to change in either subtle or extreme ways. Much of the fun lies in witnessing their reactions. Campbell takes us by the hand and into the company of a disparate bunch of characters, each dealing with their own complicated life.

The writing in this collection is so finely crafted that you find yourself sitting in the same room as the characters and seeing what they see, breathing their air, celebrating their joy at success or feeling the pain of their failures.

The first short story, which gives this collection its title, is the tale of hopeless love between two people whose lives are not destined to follow the same path. It is set in a place called Stone Gap, which feels like the American Deep South, during a long and dry summer in which innocent youth turns to experience and heartache as the rains finally arrive. Campbell’s use of simple language and dialogue allows you to ‘hear’ the accents, while accentuating the naivety of the two main characters who turn from friends to lovers during a tempestuous day as they seek shelter in a cow shed.

And I swear he had no notion in his head but keeping our hides dry. Our clothes steamed in the straw, while our bodies took charge of one another.

The above suggests a love that comes by surprise, arriving unplanned, even though the fires of desire have been burning for some time. The consequences of this union are shocking, unexpected, and ultimately tragic. With ambition calling our narrator’s love away from the small town and to a promising career, she is left to deal with these consequences alone.

On our last day of school, we roamed our best places until dark, feet bare and holding hands. Nate rolled up his certificate like a telescope.

“I can see for freakin’ miles,” he said. His voice was rasping with hopes. And I could feel a tremble in his thigh against mine. Starred nights were Nate’s favourite time.

“I can think straight. See a path.”

That’s what he always said. His destiny wouldn’t be the coal face always. He knew it and so did I.

The two lovers know they can never be together, and a touching scene shows them saying goodbye even as they bind themselves together and vow to love each other “until the planets slip their tracks”.

Campbell’s handling of a bittersweet story that pulls at your heart is a fantastic entry point into this collection.

‘Solid Orange Sea’ – the next story and one of my favourites – shows us the sudden shift in the relationship between a brother and a sister. Theo is frustrated because Clemency, who is at odds with the world, clumsy and slow to learn, is hogging all the attention in his family. Campbell paints a lovely picture of a family – sans father figure – that is caught up in the hectic and endless loop of life (school, dance class, jam making, Brownies). With subtle description of the mother does, Campbell makes it clear that the character will do anything for her children. When Clemency wants to take on a daunting test to earn a badge in the Brownies, her mother believes in her when others do not:

“Clemency needs time…. She’ll get there in the end.”

The writing expertly explores the relationship between brother and sister; it leaves no doubt that Theo loves his sister, but also wishes to be left alone to play with his post office, without her messing up his game: Yet with the house to himself, the post office waited in vain for him to open it.

He lets his friends mock her – and profits financially from it. But he still helps her to prepare for her test, realizing for the first time that Clemency actually thought about things.

The ending made me cry! I won’t spoil it, but I will say that in just four words Campbell demonstrates the strength and love of this family who must battle against the odds as they learn of life and love.

Other memorable stories in this collection include ‘Cherry’s Stain’, which is about a therapist/life coach who thinks she has a handle on other people’s faults and anxieties while being blind to her own.

‘The Reliable Sitter’ is a strange tale of a babysitter complicit in a strange deceit. ‘The Invitation’ deals with how it feels to be an outsider and to not be accepted into a community, through the eyes of a child who does not really understand why.

Whether telling us about a foreigner far from home and struggling to survive, or about a family’s tragic loss revisited, each of the short stories in this collection is linked by the title of the collection. ‘When Planets Slip Their Tracks’ is the moment when you realise that your life is not going to be ordinary and your path not without its challenges.

I look forward to reading more stories from this author, and would recommend this to anyone who enjoys vivid description and fully immersive tales.