I feel like I need to start this review with a disclaimer: many of the people featured in this piece are friends of mine. That’s a really joyful thing about Manchester’s live literature scene: once you’ve shown your face a few times, you’re likely to come away with some lasting friendships. The same names do tend to crop up on different line-ups at events across the city, and I often get the pleasure of watching performers go from night to night and strength to strength as they develop their craft here. However inconvenient that is when you’re trying to review something. 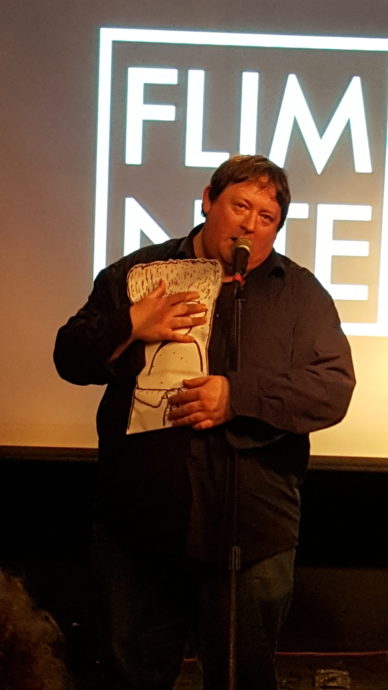 Nepotism aside, Flim Nite’s Mad Max event at the ridiculously welcoming 3MT on Monday night, was genuinely full of lovely surprises. Not least the point at which, about twenty minutes in, there was an appropriately apocalyptic power cut. Flim Nite don’t shy away from having a reasonable amount of technical set up, so this sort of setback could have been catastrophic. But it says something for the serious good will they’ve built up and the energy they foster in the room that no sooner had the lights gone down, than the audience were holding up torches on their phones and helping the team to light candles. The atmosphere was remarkably undented; if anything, we were all a bit disappointed when electricity was restored in time for the second half.

If you don’t know what Flim Nite is, let me have a go at explaining. Every month, hosts Jasmine Chatfield and Jack Nicholls take a (usually cult) film, chop it up into bits, and hand out sections of it to performers of all kinds to take as inspiration for their performances in whatever way they see fit. Along with an open mic section, this collaborative ‘retelling’ of the film usually involves an eclectic mix of short fiction, poetry, music, comedy, puppetry, dance, and anything else really that can be done with ten minutes on stage and a very enthusiastic audience.

It was a thoroughly enjoyable event. Jack and Jasmine host with a laid back, high energy quality that carries the whole event and fosters a lovely rapport between the performers and audience, which makes Flim Nite a great platform for seasoned and emerging writers alike.

There were two short story writers on the main bill: Trisha Starbrook and Bad Language co-host Fat Roland. The former, despite the blackout that occurred at the start of her set, gave us a funny and compelling piece called ‘Five Wives and a Furiosa’. Its charm and warmth came from its brilliantly recognisable observations, even in a dystopian wasteland setting, and was littered with wonderfully quotable one-liners: “Their dresses are short, but not slutty short – classy short”, “She wears trousers so she’s probably still a virgin,” and “There are two other wives but they don’t speak in this scene.” I could go on. Fat Roland, on the other hand, gave us a cartoon-assisted mash-up of Mad Max and The Muppets, which filled the room with delighted horror in his signature style, which got some of the biggest laughs of the night. His mix of gleeful brutality and genuine pathos is always a pleasure to behold.

Tamsin Macdonald, who is fast becoming a name to look out for at events across the city, also gave us a short story on the open mic. ‘The Mad Man in the Corsa’ was a witty little tale that playfully put Mad Max into an unsuspecting suburban neighbourhood, with brilliant characterisation and tone: “I told him, it’s my way or the highway.” 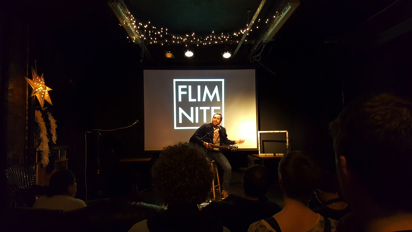 Plenty of credit should also go to the other performers, and the eclectic mix of work that the organisers brought together. Lenni Sanders and James Varney both shone with their post-apocalyptic poetry. Sanders in particular gave us two beguiling and romantic narrative poems (complete with audience-assisted crow noises) that could just as well have served as a lyrical short story: “When I’m fantastically dead / It could be that he will love me best of all / Oh, somebody be proud of me / I need it.”

Musician Jez Hewes, who used guitar and loop pedal to close the night with a fantastically atmospheric set, was another highlight. And the multi-talented writer/clown/comedian/theatre-maker Julie Burrow gave us a charming and funny comedy skit using a hand-crafted puppet made of newspaper; a description which doesn’t do justice to its smart but silly sense of humour. One of the great things about Flim Nite is the variety of acts they attract and programme, meaning that you get to revisit the chosen films through all kinds of different media and lenses.

Now, I should probably say that I have never actually seen Mad Max. Having been to several of Flim’s past events inspired by films and TV shows I know and love (Jumanji, Thelma and Louise, Game of Thrones), I wondered what it would be like to experience the performances without any appreciation of their source material. And I tell you what: if the real thing is as entertaining as Flim Nite’s version, I think I might have to give it a go.

Abi Hynes is a drama, fiction and poetry writer based in Manchester. She runs theatre and film company Faro Productions and cabaret collective First Draft. Her work has been featured in a range of print and online publications, including Litro, The Molotov Cocktail, The Fable Online, Spelk Fiction and Foxhole Magazine, and she regularly performs at live literature nights around Manchester and beyond.